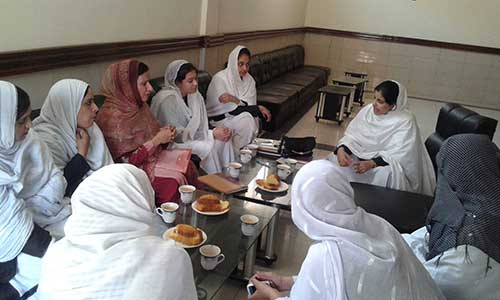 A question of priorities

“The union’s objective is to make women stronger. We are seeking to empower them through awareness and provide them with the right to association and collective bargaining,” she said.

According to Bano, the union will also safeguard a working woman’s right to dignity, social security, equal rights and privileges. “The most important aim of the women’s union is to provide a strong link between working women and the management,” she said.

“Many of these are fundamental rights guaranteed in the Constitution. However, they receive little implementation in practice, particularly
in K-P.”

Bano said most workers’ unions in the province are dominated by men and tend to overlook the challenges faced by working women.

Shawana Shah, the union’s co-founder said the initiative will give priority to the problems faced by working women and urge the relevant government bodies to resolve them.

“We will elect leaders from each sector who will appeal to the government by proposing new strategies,” Shah said. “We must realise that the participation of women in the government is crucial.”

The organisation will also provide free legal support to women in the workplace as well as appropriate legal training. Bano and Shah stressed that the union will provide a level playing field for all women regardless of their social status.

“The union will provide an open platform for anyone who wants to join regardless of the nature of work they do,” Bano added.